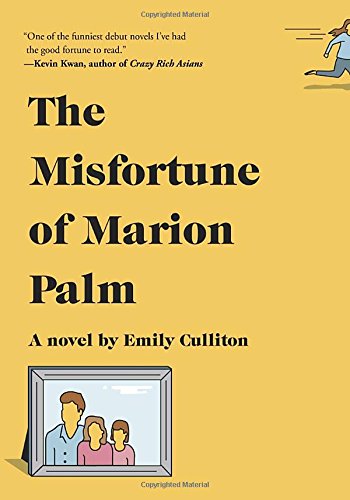 THE MISFORTUNE OF MARION PALM by Emily Culliton

I wanted to read Revolutionary Road, by Richard Yates, before I saw the movie, which came out last week. It had been on my TBR list for a long time, and the holiday release of the highly anticipated movie, starring a reunited Kate Winslet and Leonardo DiCaprio, was good incentive for me to pick it up.

Revolutionary Road is about a young couple – April and Frank Wheeler – living in the New York suburbs in the 50s. Frank works for a business machine company, the same one his father worked for many years ago. April is a frustrated housewife with two small kids who finds living in the suburbs imprisoning and unfulfilling. Frank and April married young, and had kids earlier than they expected.  The book is about their unhappy marriage, and their increasing inability to communicate and satisfy each other. Frank and April seem incapable of connecting with each other unless they are belittling the suburban society that surrounds them, filled with office drones, pastel cookie-cutter homes, and women without ambition.

Yates is a precise, compelling writer, and despite the book's age (55 years) the narration felt fresh and current. I have to say, however, that I didn't love it. I know it is supposed to be a period piece, a statement about the 50s in America and the perils of conformity and materialism.  However, I found the book to be less universal than that. I read it as a sad story about two people whose marriage takes a few very tragic turns. April, especially, is a deeply troubled woman with issues that extend beyond Frank to her horrible parents and childhood. To me, this book was about the disintegration of a relationship. Perhaps the book was revolutionary at the time it was published, and its commentary about the lives of young, middle-class suburban Americans was jarring and new. Now, however, there have been so many expressions of rebellion against the 50s that this book seemed less powerful to me.

I am curious to see the movie, to see how faithful the script remains to the novel, and how Leo and Kate interpret these unhappy spouses. I am glad I read Revolutionary Road, and certainly found it hard to put down. But I didn't love it.