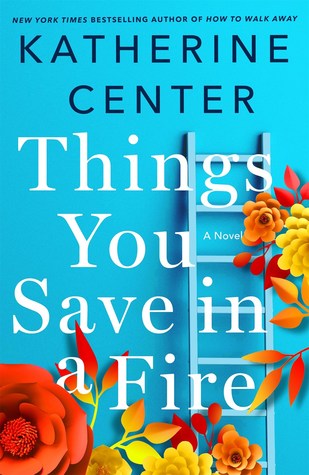 THINGS YOU SAVE IN A FIRE by Katherine Center

Carry the One by Carol Anshaw, one of the books I picked up at The Strand a few weeks ago, came very highly recommended by a few book bloggers I respect a lot (Carrie at Nomad Reader and Julie at Booking Mama) and by EW (Grade: A), so I picked it up with anticipation last week. I appreciate what was unique and impressive about the book, but I have to say that I didn’t like it as much as many others have.

Carry the One opens at a wedding reception in the Midwest. It’s in the wee hours of the morning, and Carmen, the bride, has just put her siblings Alice and Nick in a car driven by Nick’s stoned girlfriend Olivia and carrying a few other passengers, including Maude, a woman that Alice has just gotten involved with. Soon after setting out from the farmhouse where the wedding took place, the car strikes and kills a  young girl who was returning to her house in the middle of the night. Carry the One tracks Carmen, Nick, Alice, Maude and Olivia’s lives for the next 20+ years, through their ups and downs, breakups, joys and challenges.

Anshaw is a beautiful writer, almost poetic. Her descriptions are spare but powerful, and her eye for detail and the little gestures and emotions that make up relationships is keen. Carrie at Nomad Reader compared Carry the One to The Year We Left Home  (reviewed by me here) and I think that’s a pretty apt comparison. Both novels track members of a family over many years, not with faithful yearly check-ins, but through vignettes and flashes of detail that together form an almost impressionist canvas of their lives and interactions.

I have tried to pinpoint where this book fell short for me. I think it was the characters themselves. Carmen is an activist who seems oddly detached from her own life, even as she gets divorced and remarried to a man with a difficult daughter. Alice, a painter, goes from relationship to relationship, caught up in passion and longing but disdainful of conventional relationships and the stability they provide. And Nick is a junkie, unable to stay off of drugs for any substantial period of time. Each of these characters thus cuts him or herself off from deeper connection to the people around them, and at times from each other. This lack of connection – the detached way that these characters floated through their lives – ultimately put a distance between me and the book as well. I am surprised by those who said they couldn’t put this book down; I had to make an effort to stay engaged with these characters and what was happening to them. It’s a testament to Anshaw’s writing that I enjoyed it as much as I did.

I also found the plot construct of the accident linking these people together forever – and indelibly impacting them – to be somewhat artificial. While I understand that it served to keep the characters from spinning off immediately in directions far from each other, I found the way the dead girl was threaded through their lives to be forced. Of course they would be impacted by what happened, but as a theme unifying the lives of these characters, it didn’t work for me.

I know that I am in the minority on this one. I just didn’t love it. But I’d love to hear more from those of you who did!