I am back! Our son, Nathaniel David, was born last Friday, June 8, at 2:42 PM. I think he’s the most adorable baby boy ever. Here is a photo from when he was 2 days old: 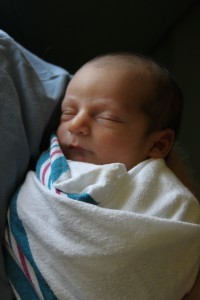 I had the chance to do a little reading this week too. (Of course, I started this post 2 days ago and am just getting back to it today, so while the reading might not suffer terribly, the blogging most likely will!) While in the hospital, I finished The Singles, by Meredith Goldstein. The Singles is about a wedding, but instead of focusing on the bride and groom, it centers around 5 single guests at the wedding. One is a bridesmaid, one is her best friend from college, and one is another male friend from their college crowd, while one is the son of a woman who was invited but couldn’t attend and one is the bride’s uncle.

Each of the singles is dealing with either an unhappy breakup or some other issue/dissatisfaction with his or her love life, and The Singles brings those issues into relief as they contrast with the image of happily-ever-afterdom presented by the bride and groom.

The Singles is an easy read, but not necessarily a light one. It’s dry and often sad, as Goldstein pegs the feelings of self-consciousness and loneliness that anyone who’s ever attended a wedding solo has likely felt. She’s not particularly sentimental about marriage, and she’s very aware of the politics and complications that go into weddings. I liked how she really nailed the whole wedding experience, and also that time of life – late 20s – when weddings can really stir up conflicting feelings.

The characters were interesting but not that well-developed. They did things that seemed inconsistent at times, or at least surprising, because the author hadn’t developed them that extensively.

The Singles is poignant and sad at times, with some often depressing commentary about modern relationships. But I recommend it if the subject sounds appealing.