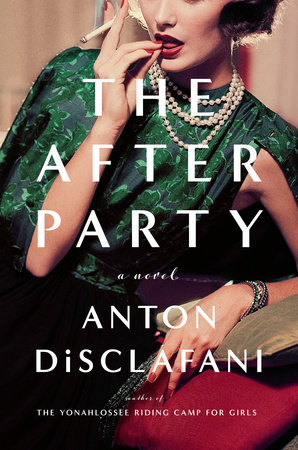 THE AFTER PARTY, by Anton DiSclafani

I have read a lot of Sue Miller books. (Here are a few.) I’ve liked quite a few of them, too, so I was excited to pick up her latest book, The Arsonist, at BEA, and was also lucky to land a review copy of the audiobook version.

The Arsonist takes place in New Hampshire post-9/11. It’s summer, and the town of Pomeroy is soon to play host to the “flatlanders” who spend three months of the year at their summer homes, during which they coexist mostly peacefully with the full-time New Hampshire residents of the town. But just as the summer residents start descending, those summer homes start going up in flames, putting everyone on edge and jumpstarting a police investigation. The Arsonist is also about Frankie Rawley, an expat who has returned to the U.S. after many years living in Africa doing hunger aid work. She is staying with her parents, Sylvie and Alfie Rawley, who have retired to Pomeroy after years in academia. Frankie’s return to the U.S. and to her parents’ home coincides with the first fire.

Miller weaves these two plots – first, the tension in Pomeroy caused by the arsons and the cleave between summer and full-time residents, and second, Frankie’s disorientation upon returning to the U.S. and her romance with a local newspaperman named Bud,  a transplant to New Hampshire from Washington, DC – skillfully throughout the novel. The fires heat up  literally, while Frankie and Bud’s romance heats up figuratively. Frankie, though, after years of “temporizing” in Africa with a shifting cast of colleagues, is incapable to committing emotionally, to a person or to a place. She’s sort of floating through her life, insulated from emotion, with no real roots anywhere, which makes her romance with Bud a fragile one.

I found The Arsonist, like Frankie, to be a little cold. I had trouble feeling invested in either Frankie or Pomeroy. I was curious to know who set the fires, and whether Frankie and Bud would develop into anything, but I didn’t care that much. A subplot involving Alfie’s retreat into Alzheimer’s was sad but ultimately too clinical for me. These sturdy, unemotional New Englanders were too restrained, too controlled for me to feel emotionally connected to The Arsonist.

I was a bit disappointed by the book given how much I’ve enjoyed Miller’s other works.

I listened to The Arsonist on audio. It was narrated by Miller herself, and I thought she did a pretty good job with it. I always appreciate an author narration, because you know you’re hearing the characters as they were intended. But I felt like Miller was overly enamored of Frankie – she performed Frankie in this earnest, sympathetic voice that made me even more irritated with the character. I wonder if I would have felt that way if I had read the book instead of listening to it.

A decent read, but not my favorite by this author.