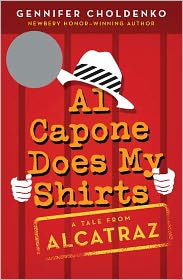 AL CAPONE DOES MY SHIRTS by Gennifer Choldenko

Exciting news! I made it through one of the books in the huge TBR pile. I wrote about All About Lulu by Jonathan Evison last week – post is here – and actually finished it yesterday.

I feel like I am turning into a book curmudgeon – I haven’t really loved that many books lately. Unfortunately, I was kind of underwhelmed by this one as well. It’s about Will Miller, a boy growing up in the 70s in Southern California. (The story follows him through to his mid-twenties, with a short postcript at the end that presumably takes place at the present.) Will grows up with his bodybuilder father and younger twin brothers after his mother dies of cancer.  After a few years, his father remarries, to a woman with a daughter, Lulu, who is a bit older than Will. The two are inseparable for many years, with Will basically idolizing his stepsister, until she goes away to cheerleading camp and returns a changed person. She is distant and cold to him, which leaves him lost and devastated.

The book is about Will’s futile attempts to get over Lulu (for by the time she abandons him their friendship has turned into unrequited love on his end), and his obsession with her throughout his young adult years. Will also moves out of his father’s house, goes to community college, gets some marginally satisfying jobs, and doesn’t meet any other women. He does stay in touch, sporadically, with Lulu, and has some interludes with her at different times with mostly disastrous results. At the end, a secret is revealed which explains her change of heart toward him many years earlier.

I didn’t love this book. Here are some possible reasons:

Jonathan Evison is a good writer. All About Lulu has a nice mix of humor, wry observation and sadness in it, and I’d like to read other books by him, to give him another chance. But this wasn’t the book for me.

For some more positive reviews (and they abound) about All About Lulu, check out: