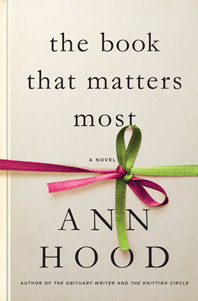 THE BOOK THAT MATTERS MOST by Ann Hood

One of the books getting a lot of acclaim this summer – and there are many – is State of Wonder by Ann Patchett. I was a huge fan of Bel Canto - it is one of my top 5 favorite books – but I was disappointed with Patchett's later novel Run, which I reviewed here. Given the amazing reviews of State of Wonder, though, I jumped at the chance to read it.

When State of Wonder opens, Marina Singh, a 42 year-old pharmacologist for a pharmaceutical company in Minnesota, learns from her boss, the head of the company, that Anders, her co-worker and officemate, has died in the Amazon. Anders had been sent by the company months earlier to check on the progress of a fertility drug under development in the Amazon by Marina's former mentor, Dr. Swensen, an ob/gyn who has left her practice to research a tribe in the Amazon in which the native women give birth into their 70s.

Anders' widow begs Marina to follow Anders' path in the Amazon and find her former mentor, in order to learn more about how Anders died. Meanwhile, her boss begins to pressure her to go as well, so that she can finish the investigation that Anders started on the trip.

Some have compared State of Wonder to Heart of Darkness. Marina's trip to the Amazon is one in which she must confront many of her fears, from the physical (snakes, natives, malaria) to the emotional, as Swenson still deeply affects Marina and her self-confidence. Patchett's writing is beautiful, as always, and she expertly creates narrative tension that is almost unbearable at times. Her teasing of information at key junctures through the story is masterful, especially in retrospect.  There are a few times that the story seemed to lag a bit, but looking back now that I have finished, I realize that those sections were necessary to the overall framework of the book.

I've been a bit vague in my description of the plot of State of Wonder because I don't want to give anything away. What I enjoyed most about the book were the moral questions Patchett raised in the book, about fertility, parenthood, and responsibility for actions that affect individuals and society.

I read and listened to State of Wonder, whose audio version is narrated by actress Hope Davis. She is an excellent narrator. She conveys a range of voices perfectly – from Marina's terror brought on by drug-induced nightmares to the infallible tone of Dr. Swenson.

Overall, a very good read. Not as good as Bel Canto, but that's a nearly impossible standard to meet. Thank you to Harper for the review copy.