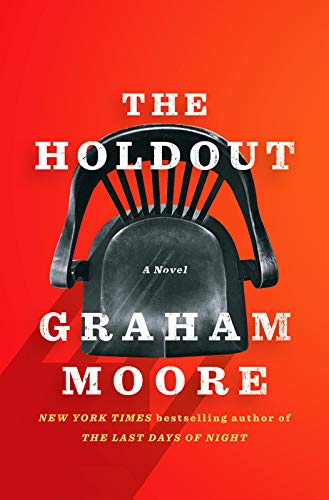 THE HOLDOUT by Graham Moore

If you were reading EDITWB in the spring, you know that I read and reviewed Me Before You, Jojo Moyes’ novel about euthanasia told through the lens of Lou and Will, two of the more memorable characters I have come across in fiction. Me Before You got a lot of buzz last spring, and a lot of people have told me that they read it based on my review or others they read online.

Well, I have some some exciting Jojo Moyes news to report…

First, she has a new book out – The Girl You Left Behind – and second, Me Before You just came out in paperback!

Here’s what The Girl You Left Behind is about:

France, 1916:  Artist Edouard Lefevre leaves his young wife, Sophie, to fight at the front. When their small town falls to the Germans in the midst of World War I, Edouard’s portrait of Sophie draws the eye of the new Kommandant. As the officer’s dangerous obsession deepens, Sophie will risk everything—her family, her reputation, and her life—to see her husband again.

Almost a century later, Sophie’s portrait is given to Liv Halston by her young husband shortly before his sudden death. A chance encounter reveals the painting’s true worth, and a battle begins for who its legitimate owner is—putting Liv’s belief in what is right to the ultimate test.

The Girl You Left Behind is a breathtaking story of love, loss, and sacrifice told with Moyes’s signature ability to capture our hearts with every turn of the page.

I have copies of Me Before You (in paperback) and The Girl You Left Behind to give away to an EDIWTB reader. If you’d like to win these books, leave me a comment here and I will let Random.org do its magic next Friday, August 9.