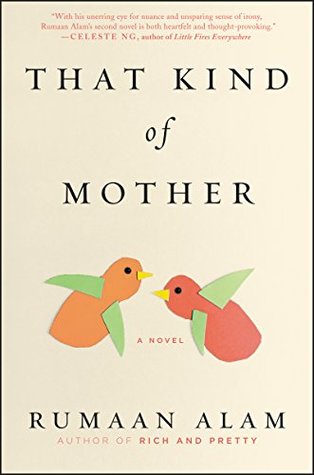 THAT KIND OF MOTHER by Rumaan Alam

Early Decision by Lacy Crawford is a fictional account of one admissions season in the life of Anne, a college application advisor to privileged high school seniors with parents desperate to get them into the right school. Anne works with a small group of kids each year, and Early Decision focuses on four of her clients: Sadie, whose legacy admission to Duke is a sure thing, given her father’s stature at the school; Hunter, an underachiever whose parents are desperate for him to go to Amherst, a serious stretch; Alexis, a brilliant girl whose intelligence dwarfs her parents’ and who has set her sights on Harvard; and William, a closeted theater enthusiast who wants to go to Vassar, despite his father’s pronouncement that it’s “a girls’ school”. Anne also works pro bono once a week with underprivileged, ESL kids to give them some academic guidance in the absence of a college counselor at their struggling school.

I found Early Decision to be maddeningly inconsistent. There are flashes of brilliance throughout the book, from Crawford’s elegant writing and her sharp (and often very funny) observations about college admissions, modern parenting, and the pressures faced by kids trying to balance who they are with who their parents want them to be. But at the same time, the plot lagged at times and getting through the book became a struggle. And Anne was a pretty frustrating protagonist. She was so good at advising and inspiring the kids, but her own life was totally stalled.

So while Early Decision wasn’t perfect, it was worth reading – if only for Crawford’s two-page list (pp 30-31) of top U.S. colleges and their “reputations”: “Vanderbilt for the skinny girls with dreams of the South”; “NYU if cash was no issue or you intended to train at Juliard”; “B-plus Manhattanites turfed upstate: Hamilton, Colgate”; “Big drinkers in mining country: Lehigh and Bucknell”; “BatesBowdoinColby, said in one breath, for Bostonian stars and lesser Grotonians”, etc.  If you know the parent of someone applying to college, or if you ARE the parent of someone applying to college, then Early Decision will likely be therapeutic and terrifying at the same time.

Early Decision had a lot of promise, which is why I found its faults frustrating. The highs are high, for sure, but the lows made it drag.