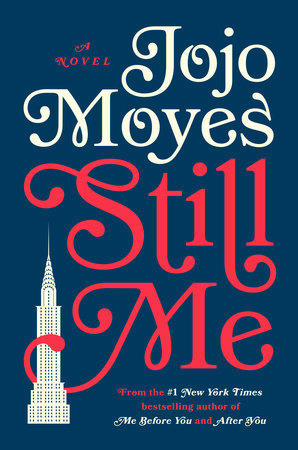 STILL ME by Jojo Moyes

The Comfort of Lies by Randy Susan Meyers is about three unhappy Boston women whose lives are intertwined. Juliette is married to Nathan, with two sons. Five years before the book opens, Nathan had a year-long affair with Tia, a twentysomething who fell desperately in love with him and ended up pregnant with his baby. Nathan broke up with her as soon as she told him she was pregnant, and never knew that she had the baby and gave her up for adoption. The baby was adopted by a couple – Caroline and Peter – who live in a huge, beautiful house but don’t spend much time with their adopted daughter.

So why are these women so unhappy? Juliette can’t get past her husband’s affair and the nagging feeling of mistrust that is eroding her love for him. Caroline doesn’t enjoy being a mother and resents her husband’s suggestions that she scale back her work to spend time with her daughter. And Tia regrets giving up her daughter and can’t get over Nathan, despite her anger at his abandoning her.

Tia sets the book’s triangle in motion by sending photos of her daughter (which Caroline has sent to her over the years) to Nathan, letting him know in a letter that the girl exists. Juliette intercepts the letter, learns about her husband’s daughter, and, rather than confront him, manages to meet with Caroline without letting her know the connection. Ultimately, Caroline contacts Tia, Juliette confronts Nathan, and they are all forced to deal with the consequences of how they are connected.

Meyers explores each character’s actions and motivations in great detail – so much so that it felt like the actions were unfolding in real time. She is quite adept at analyzing the often inconsistent feelings the women experienced about their predicaments, and she clearly feels compassion toward each one. But I didn’t love The Comfort of Lies. There no joy to be found anywhere in this book. Each of the characters is desperately unhappy and seems to experience nothing that comes close to enjoyment or fulfillment (other than through work). They are selfish and unlikeable, and the redemption Meyers permits them at the end of the book is rushed and implausible. I also didn’t buy that they all formed some sort of a family by the close of the book. Given the awkwardness of the origin of their relationships, I found the ending unlikely.

It was a bit of a slog to get through The Comfort of Lies. I think I was looking for a palate cleanser when I picked it up – something to remove the taste of the last read and prepare me for future courses – but instead, it has only perpetuated my curmudgeonly streak. The book has gotten many good reviews, so this may again just be me being grumpy. Hopefully I will snap out of the reading doldrums soon.