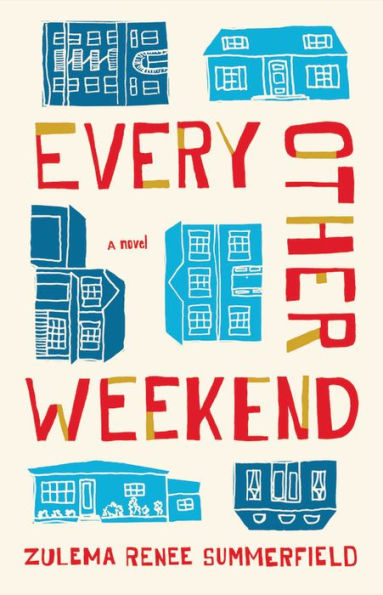 EVERY OTHER WEEKEND by Zulema Renee Summerfield

Tell The Wolves I’m Home by Carol Rifka Blunt is another book that I didn’t like as much as most people did. I bought it because I had heard great things about it, and I enjoyed parts of it, but overall I didn’t love it.

Tell The Wolves I’m Home is set in the 80s (which the author never lets you forget, throwing in references to things like Dennis Miller on SNL and New Wave songs and Yoo-Hoo whenever she could) in Westchester. When it opens, 14 year-old June is about to lose her beloved uncle Finn to AIDS, which at the time was a scary and mysterious disease that caused paranoia and blame in the general population. June doesn’t really fit in with her friends at school – she’s sort of a Renaissance Faire type of girl – and is left totally adrift when her uncle dies. Finn was her closest friend, and had become a replacement for her older sister Greta, with whom she had once been very close.

The title of the book refers to a portrait Finn had painted of June and Greta, which he finished right before he died. Finn was a famous but reclusive artist who had disappeared from the art scene a decade earlier despite critical acclaim and financial success.

After Finn’s funeral, June learns that he left behind a boyfriend, Toby. Her parents scare her into thinking Toby is a murderer for giving AIDS to Finn. But Toby starts sending June letters and secretly trying to see her and share special things that had belonged to Finn. The two slowly develop a relationship based at first on their mutual grief over Finn’s death, but eventually find their own ways to connect.

Meanwhile, Greta keeps acting colder and meaner to June, and their parents are absent (it’s tax season and they are accountants). June steals away to the city to see Toby more and more frequently, and strange things keep appearing on the portrait Finn painted (which has been estimated to be worth hundreds of thousands of dollars).

Here’s what I liked about the book: Finn and June’s relationship; the backdrop of the 80s (I am a sucker for anything set in that decade); the depiction of high school isolation and insecurity; and Toby. Here’s what I didn’t like: it was unrealistic (how could June sneak off to the city like that, day after day); the bad choices June made over and over again; and the fact that the loooong middle of the book had the same pattern happening over and over (June pushed Toby away and then returned to him; Greta got drunk and admitted she missed June; June ignored Greta’s attempts to reconcile and went back to Toby; June needed more reassurance that Finn loved her). After a while, it got boring and predictable. No one really changed; they just danced around each other and lobbed bits of honesty at each other before retreating.

I respect what the author was doing here – exploring AIDS in the 80s through the prism of a coming-of-age novel – but the book was too flawed to fully succeed.

I listened to Tell The Wolves I’m Home mostly on audio, and I thought the narration by Amy Rubinate was quite good. I enjoyed the audio more than the print version, perhaps because she gave June some credibility and pathos that was missing from the book. She expressed the petulance and confusion of a 14 year-old, and handled other voices quite well.

I’ve been a bit of a cranky reader lately, and Tell The Wolves I’m Home is yet another on the list of books other people loved that I didn’t. I am hoping to right the ship in 2015. Not sure how yet, but I’m determined to lose myself in books I love.

If you read and loved Tell the Wolves I’m Home, tell me why.