Bennington Girls Are Easy by Charlotte Silver has a good premise: chronicle the friendship of two Bennington grads from their early twenties to their mid-thirties as they experience moving to New York City, meeting men, finding their professional footing, and navigating friendship as young adults instead of college students.

Sadly, Bennington Girls Are Easy did not live up to my expectations.

Let’s start with the positive. Silver is a good writer with a sharp sense of humor. I enjoyed her commentary about New York and its boroughs, particularly Brooklyn. She skewered trends, neighborhoods, even whole colleges in a pretty entertaining way. Silver also has a good handle on aging, in particular the erosion of the feeling of invincibility and dazzling youth as women approach 30. She also comes up with really funny names for her characters, like Bitsy Citron and Vicky Lalage: 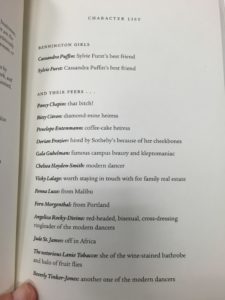 And now the negative. The characters! They were vapid, self-absorbed, materialistic and uninteresting. All of them. It was impossible to care about any of these women. The two main characters had a falling out halfway through the book, and they were each just so awful to each other that I couldn’t bother to take a side. These women went to Bennington, and not a single one of them had a job, not to mention a career. One was at least entrepreneurial in her late 20s, launching a lemonade stand (!) in Brooklyn that she turned into a company that made seasonal locally-sourced jam, but even that business tanked after a few years.

I think the hardest thing for me to take was that these women showed so little evolution of their worldview over a decade. One character appeared to mature a little bit, showing some sense of self-awareness of her privileged place in the world, but her awareness quickly turned into bitterness and cynicism, her self-absorption intact.

I do want to give credit to Rachel Fulginiti, who did a masterful job with the audio version of Bennington Girls Are Easy. If it weren’t for her entertaining, breathy delivery, I would have given up on the book a long time ago. She made it much funnier and kept me going.

Bennington Girls Are Easy was not without its touching moments, but they were few and very far between. I was mostly annoyed as I read it, which is never a good sign. There’s probably a band of rich New Yorkers who would appreciate this book, seeing themselves in the WASPy characters who have very few cares in the world, but I think it is less palatable for a wider audience.