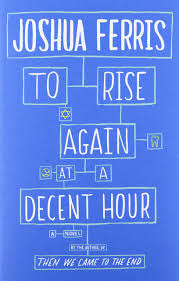 TO RISE AGAIN AT A DECENT HOUR by Joshua Ferris

The Daylight Marriage by Heidi Pitlor is a thriller about a suburban Boston mother who disappears from her daily routine the day after a bad fight with her husband. Hannah and Lovell have two children, ages nine and fifteen, and have been married for seventeen years. Lovell is academic and distracted, and while he feels he married out of his league, he’s no longer good at noticing or appreciating his wife. Hannah is a stay at home mom with a part-time job in a flower shop who feels distant from her husband and bored/unfulfilled with the routines of motherhood.

After the fight, in which Lovell questions how she spends her time and why she can’t get anything done, Hannah simply vanishes. She doesn’t pick her children up at school, and never returns home. What happened to her?

The Daylight Marriage was just OK for me. Pitlor is observant and creates very believable scenes and dialogue. There are little details sprinkled throughout the narration which made the action come alive for me. Her description of Hannah’s life and routine – picking up the kids, going to the orthodontist, making one of the few meals they would eat for dinner, homework, her husband’s vacancy – gave some clues as to why Hannah might want to disappear. She wrote, “When in [Hannah’s] life had she lost her desire for the next moment and then the next? It seemed to have happened slowly, not in one sudden blow, but over thousands of ordinary moments, in the tiniest of choices meant to lead her toward a well-defined future, the sort that had been chosen and lived by so many other people.”

Lovell was frustrating at first in his obtuseness, but he is redeemed somewhat by the end of the book. Faced with Hannah’s disappearance, he is forced to participate as a parent in a way he hasn’t before, and that process is gradual but convincing.

So why did this book fall short? I think it was the ultimate resolution of what happened to Hannah. Despite her apparent depression and desperation, her actions were unrealistic and unlikely. Pitlor throws in a few red herrings, but ultimately the answer to what happened wasn’t terribly shocking.

In the end: good writing, some keen observations, but an unfulfilling story.