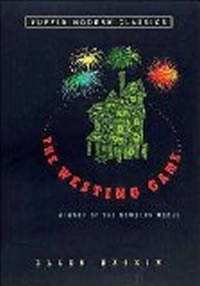 THE WESTING GAME by Ellen Raskin

Jojo Moyes’ Me Before You was a big hit when it came out a few years ago, and I really liked it too. It’s the story of Louisa Clark, a working-class young woman in England who is hired to take care of a wealthy paraplegic named Will. Louisa and Will develop an improbable friendship that deepens into something romantic, but Louisa loses him when he goes through with his plan to take his own life. (Incidentally, Me Before You is being turned into a movie – watch the trailer here).

Presumably at her fans’ urging, Moyes decided to revisit Louisa and wrote a sequel to Me Before You called After You, which picks up about a year and a half after Will’s death. Louisa has used the money Will left her to travel through Europe and buy a flat in London. But she’s still adrift, grieving his loss and toiling at a dead-end job as a bartender at an airport restaurant. One night, she returns home after a long night at work, and, while standing on her roof terrace, loses her footing and falls down one story to the balcony below. Louisa’s fall brings on the next stage of her life: a reconciliation with her family (after an estrangement due to her role in Will’s death), the introduction of someone from Will’s past, and a grief recovery group that leads Louisa to a possible love interest.

I enjoyed After You. The pacing is perfect (has this book been optioned yet?) and the characters are fresh and real. Sure, the writing and characters are sometimes cliched – Louisa’s family and her grief support group are textbook “quirky” – but Louisa is a compelling character to follow. She is relatable and self-deprecating, and you want good things to happen for her. Her romance has some ups and downs, and the emotional core of the book – Louisa’s relationship with the figure from Will’s past – is similarly bumpy. So while things don’t just sail along, this is classic Moyes territory – you have a general sense that everything will mostly turn out OK.

Is After You as good as Me Before You? No. It doesn’t pack the emotional punch of its predecessor. But it does take a look at grief from a number of perspectives, showing how the loss of someone you love can impact many facets of your life, with reverberations extending years past their death. And again, it’s classic Moyes – a satisfying page-turner.

I listened to After You on audio. The narrator, Anna Acton, was just perfect. Her precise British accent and her ability to moderate her voice to cover all of Louisa’s emotional states (insecurity, sadness, anger, lust) – they added up to a really good audio experience. Her voice was vaguely familiar to me, but I can’t find anything that she narrated that I’ve listened to before. I found myself eager to get back in the car so that I could resume listening to the audiobook – always the sign of a good book AND performance.