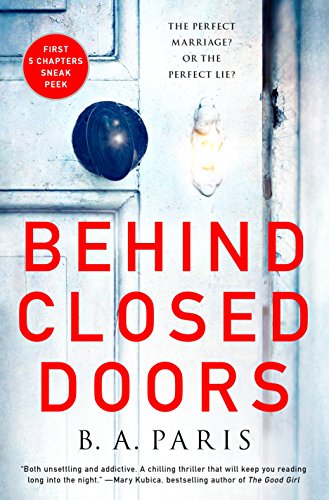 BEHIND CLOSED DOORS by B. A. Paris

I am a big fan of Elizabeth Strout’s; I read a few of her novels before she won the 2009 Pulitzer for Olive Kitteridge, including Amy and Isabelle (pre-blogging) and Abide With Me, and I was really looking forward to her latest, My Name Is Lucy Barton. It was well-reviewed by critics and Goodreads readers, so I bumped it up the TBR list this winter. Unfortunately, when I finished it, I was left wondering what I had missed.

My Name Is Lucy Barton is about a woman in her late 20s living in New York City in the 80s who develops a mysterious illness after an appendectomy. She ends up spending nine weeks in the hospital in a mostly feverish state as her doctors try to figure out what’s wrong with her. Her husband is busy with work and their two young daughters, so Lucy spends a lot of time on her own in her hospital room. One day, she looks up to find her mother sitting in the room – a woman she hasn’t seen in many years and from whom she is basically estranged.

Most of the book relates what Lucy and her mother talk about during the week her mother spends by her side. Lucy’s family was very poor when she was growing up, and her parents were cold, withholding people who rarely showed affection or love to their children. Her father fixed farm machinery, and her mother took in sewing. Lucy and her siblings never had much, and were often embarrassed at school by their clothes and appearance. Lucy worked hard and earned a scholarship to college, and from there lived her own life, getting married and having children, with little contact with her family.

Lucy is very surprised to see her mother in her hospital room, and the two women spend most of their time together talking about people they knew in their small Illinois town. Divorces, scandals, tragedies – Lucy’s mother is most comfortable relating the misfortunes of other people, rather than addressing her own behavior as a mother and her relationship with Lucy. And Lucy doesn’t press the issue. She turns into a little girl again in her mother’s presence, calling her “Mommy” and becoming the unassertive, passive child she was in Illinois. Ultimately, nothing is really resolved between the two of them. Whenever Lucy inches toward something uncomfortable – raising a painful memory or questioning her mother’s distance over the years – her mother basically shuts down and changes the subject. Lucy knows her mother cares about her, as evidenced by her getting on a plane for the first time and flying to be by her side, but her mother still shows little affection.

My Name Is Lucy Barton meanders its way to its end. Strout’s writing, which I admired in the past for its spare elegance, is repetitive, with sentences literally repeating themselves with a word or two reversed. The conversations between Lucy and her mother meander, and the chapters that take place in the present meander too, with Lucy jumping from topic to topic, memory to memory. I got really frustrated with the writing as I made my way through My Name Is Lucy Barton – I think it needed a good edit.

I appreciate the book’s treatment of messy, unresolved relationships, and the way that a lack of resolution and clarity can eat at you over the years. But other than that, I didn’t take away much from My Name Is Lucy Barton. Lucy was passive and seemed emotionally detached from her own life at times, perhaps a symptom of the cold childhood she endured. But she was sort of frustrating to follow as a reader.

I listened to My Name Is Lucy Barton on audio. It was narrated by Kimberly Farr, and I think she did a decent job with the material. Her narration took on a meandering quality, like the book, and she gave life to a rather passive character. She was good at conveying when Lucy felt lonely and sad, and her voice inspired empathy. Her narration enhanced my enjoyment of the book.