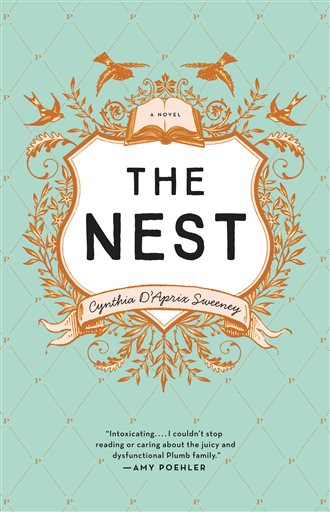 THE NEST by Cynthia D’Aprix Sweeney 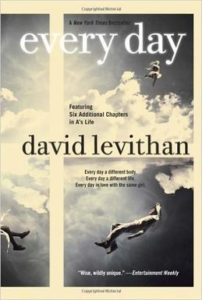 Our last mother-daughter book club pick of this year was Every Day by David Levithan. This isn’t the type of book I usually read, because it’s sort of sci-fi/fantasy, but I am definitely glad I did because I enjoyed it quite a bit.

The narrator of Every Day is A, a 16 year-old boy and/or girl who wakes up every day in someone else’s body. (In this review, I am going to use “he”, but he is sometimes a girl and sometimes a boy). He has never lived more than one day in the same person’s body; at midnight every night, he finds himself someplace else. When the 24-hour period is up, the person whose body he has inhabited “wakes up” and remembers some of what occurred during that day, but not what s/he was thinking or why s/he acted how s/he did.

When Every Day opens, A has inhabited the body of Justin, a 16-year old boy in Maryland who’s pretty much a jerk. He mistreats his girlfriend, Rhiannon, and is generally unpleasant, selfish and insensitive. A, however, falls in love with Rhiannon. A (as Justin) and Rhiannon go on a date, where he is tuned in, affectionate and emotionally open with Rhiannon, and they connect in a way that Justin and Rhiannon rarely do anymore. At midnight, of course, A takes up residence in someone else’s body, while Justin goes back to his boorish ways.

The rest of Every Day is about A’s relentless attempts to get back to Rhiannon. He commandeers his hosts (all of whom live in Maryland as well) and spends every day finding ways to get to her town and interact with her. Eventually, he confides in her about who he is, letting her into a world that he has shared with no one since he was born. His is a very lonely existence, and his connection with Rhiannon is the closest thing to a relationship that he has ever experienced. Of course, for Rhiannon, it’s immensely frustrating; she’s in love with a person (a boy? a girl?) whose presence is entirely unreliable and ever-changing.

Along the way, there are poignant chapters where A ends up in the body of an immigrant housecleaner, a suicidal girl, a home-schooled boy who takes care of his siblings, and on and on. The only constants are A’s email account, where he takes notes about where he has been, and his feelings for Rhiannon.

Every Day is a clever and compelling book. I usually avoid plotlines that are not realistic, but this one captivated me. I really felt for A and the bizarre predicament he was in, and I thought Levithan’s exploration of the permutations and ramifications of A’s body-snatching – both for him and for his hosts – was really well done.

This is YA fiction, but I liked it a lot. It’s no surprise that A is 16 years old, given the audience for the book. (I’d love to see a forty-something version!) The love shared by A and Rhiannon is a little shallow and a little quick, but again, it’s YA fiction. I liked the broader messages about acceptance of differences and the importance of seeing life through other people’s eyes. Unfortunately, not too many people read the book before our meeting so we didn’t have our usual robust mom/daughter discussion this time, but the few girls who read it liked it a lot. There is also a sequel, Another Day, which tells the same story from Rhiannon’s perspective.

Every Day was one of my favorite mother-daughter book club reads of the year, and I highly recommend it. Maybe a good summer reading choice for a teenager (or grownup!) with some time on his or her hands?