After I finished Red Clocks (reviewed here) last week, I needed a change of pace. Red Clocks was interesting but heavy, foreboding, and somewhat easy to put down. I wanted something entertaining that would grab me and suck me in. One Day In December by Josie Silver fit the bill perfectly. 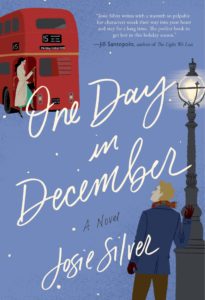 Laurie is a twentysomething living in London who is on the bus one cold December evening when she locks eyes with a man sitting in a bus shelter. They stare at each other for a little while, but before either can react, the bus pulls away. Laurie, convinced he was her true love, spends the next year looking for Bus Boy (as she and her roommate name him) to no avail. A year later, however, he enters her life in an unexpected way, and One Day In December tracks the next decade or so, as Laurie and Bus Boy (Jack) go in and out of each other’s lives. Timing, circumstance and pride keep getting in their way… but will they end up together?

Yes, it’s a cheesy premise. But One Day In December is a thoroughly enjoyable, engrossing book with a surprising amount of heft. I felt invested in Laurie and Jack and wanted to see what happened to them. There were a few twists and turns I didn’t see coming. And I liked how One Day In December accurately depicted those unrooted twentysomething days when you’re sort of an adult, but not really, and everything feels so momentous. Silver’s writing is light and conversational and the pages really flew by. So no, this isn’t Meaningful Literary Fiction, but it was exactly what I needed when I picked it up, and I was sad for it to end.

(Speaking of endings – this one was too Hollywood for me. It felt like the ending of every rom com movie I’ve ever seen. I wish Silver had gone in a different direction in that final scene. I was happy with the outcome but not how it got there.)

I alternated between the print and audio of One Day In December. I liked the narration quite a bit. Eleanor Tomlinson and Charlie Anson were very familiar voices to me by the end, and I appreciated how they communicated Jack’s edginess and Laurie’s sweetness. British accents don’t hurt either, right? The only downside of the audio was that sometimes I just had to get back to the book and ended up picking up the print. But I highly recommend the audio too.