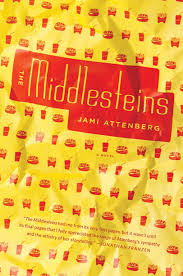 You know how with some books, when you open the first page, you have an immediate sense of dread? Like you just know that you’re in for a tortured ride that may or, more importantly, may not end well? That’s what happened to me with Other People’s Children, a debut novel by R. J. Hoffman. It’s about three women – Carli, a pregnant teenager; Marla, her abusive mother; and Gail, an infertile wife – all of whom become deeply invested in Carli’s baby girl, Maya. Clearly someone is going to lose out in the end. Other People’s Children is about who loses out, and how.

Why I picked it up: It seemed like it would be a compelling, if heartbreaking, story.

Gail and Jon are eager to become parents, but they have had a few miscarriages and have turned to adoption. They are chosen by Carli, a teenager from a neighborhood an hour away, to adopt her unborn daughter. Gail and Carli get to know each other throughout the pregnancy, as Gail takes Carli to doctor’s appointments and buys her maternity clothes. When Carli gives birth, Gail and Jon are at the hospital and take the newborn, Maya, home. Marla, meanwhile, a bitter and brittle woman, opposes the adoption and threatens to kick Carli out if she doesn’t get the baby back. This sets into motion a series of events that pushes each of the characters to make decisions in desperation, with deep, far-reaching consequences.

When I was in law school and took a course in family law, I remember thinking that the cases were so hard because the equities were often strong on both sides. That is especially true in custody cases. There are almost always persuasive reasons for more than one person to have custody of a child, and people can find themselves in custody battles through no fault of their own. Hoffmann does a very good job of making you feel for each of these characters, which makes it harder to read as the pages fly by. Who to root for? Even awful Marla, deep down, is shown to have a shred of humanity. So while reading Other People’s Children isn’t always a pleasurable experience, Hoffmann skillfully depicts how heartbreaking even a relatively straightforward situation like this can be.

I especially liked Hoffmann’s treatment of Gail and Jon’s marriage and how it was impacted by the stress of infertility and then the threat of losing Maya.

Overall, Other People’s Children was a quick, engrossing and memorable read, and a great lesson in empathy.