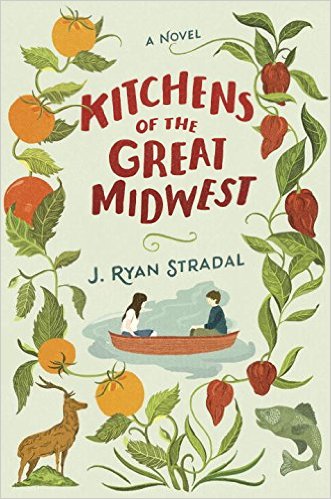 KITCHENS OF THE GREAT MIDWEST by J. Ryan Stradal

I came across Jennifer Haigh’s Mrs. Kimble on my Amazon wishlist, where it has sat for a few years, and thought it might be worth a post.  The book is about a duplicitous man who marries three women over the course of his life.  I’ve gathered from reading a few reviews of Mrs. Kimble that while Mr. Kimble’s motives are not necessarily explored to satisfaction, Haigh’s depiction of his three unfortunate wives and the havoc he wreaked on them and their families makes up for what’s missing.  Mrs. Kimble won the PEN/Hemingway Award in 2003.

It’s a clever premise, backed up by three remarkably well-limned Mrs. Kimbles, each of whom comes tantalizingly alive thanks to the author’s considerable gift for conjuring up a character with the tiniest of details. Only Mr. Kimble remains maddeningly mysterious, not only to the three wives whom he successfully dupes but to the reader as well. It’s an unfortunate misstep in this admirable debut novel. For although the story is not about Mr. Kimble but about the messy wake that his breathtakingly selfish passage through life creates, his unexplained and at times unbelievable actions are all we are given in the way of a clunky plot.

From the website Curled Up with a Good Book:

The writing, for what it’s worth, is solid and meaty, nicely portraying (though not explaining) the conflicting emotions that plague the three Mrs. Kimbles. The dialogue is convincing and natural, particularly that of Charlie, who learns to be man of the house at a young age, and never sheds his resentment at being forced into the role by his father’s absence. Although logic dictates that at least two of the three marriages don’t last, the storytelling is nuanced and rich enough to keep us in suspense, waiting each time for the other marital shoe to drop. For the most part, the Mrs. Kimbles are likable, believable women; it’s a sad truth that smart, attractive women often fall for scumbags who don’t deserve them. Unfortunately, we’re never shown the reason why these particular women (all quite different from each other) fall for this particular scumbag; because of this, Mrs. Kimble never quite transcends its promise, falling just short of the gripping, resonant book it should – and could – have been.

The Book Gypsy blog calls this book "tragic, beautifully written, and highly recommended" — not to be confused with the Book Fairy blog, who says, "Mrs. Kimble is one of those books that quickly pulls you in and won’t let go.  Everytime I put it down to actually get some work done,  I swear I could hear it calling, ‘come on, one more chapter.’"

Sounds intriguing.  Have any EDIWTB readers read this book??