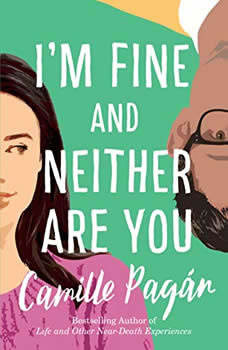 I’M FINE AND NEITHER ARE YOU by Camille Pagán

First. thank you to everyone who participated in the first EDIWTB online book club. There are 17 comments on Monday’s post about The Middle Place, which I think is a great success. Stay tuned for the Q & A session with Kelly Corrigan, which I will post once I get the answers from her. And hopefully there will be another online book club in early 2008.

A review copy of Matrimony, by Joshua Henkin, came in the mail yesterday (I requested it). I am excited to read it. It is the story of a couple that meets in college and ends up getting married early, and hastily. The novel tracks them over the next 20 years and is in part about the paths not taken. From a January magazine review:

Joshua Henkin’s Matrimony is a brilliant, beautifully written novel that tracks a couple from the time they meet in college until 20 years later as they approach middle-age.  There’s some sex, and some betrayal too, but Matrimony is far subtler than that, and what we’re left with at the end of this wonderful novel is a full sense of what it means to grow older with someone.

Through this tender excavation of love, disappointment, and ultimately hope, Henkin… gives us characters so fully formed we know them as well as we know our own friends and family.

Matrimony also does something else. It chronicles a time (the novel moves from the Reagan era, with the anti-apartheid shanties on college campuses, to Clinton, and finally to Bush; the characters watch O.J. Simpson as he leads the police on his slow car chase, and years later they are witness to the horrors of 9/11).

Matrimony also gives a full sense of the challenges a couple faces as they move from their 20s to their 30s and beyond. Death, divorce, ambition (the novel is particularly good at portraying the writing life), the balancing of two-career families, tensions over money, the decision whether to have a child: it’s all on display in Henkin’s terrific novel.

Sounds good to me! Here’s an interview with Joshua Henkin on the MoreThan a Minivan Mom blog. I will go back and read the interview after I read the book, which is approximately #34 in the queue of books to be read.

Has anyone read Matrimony yet?