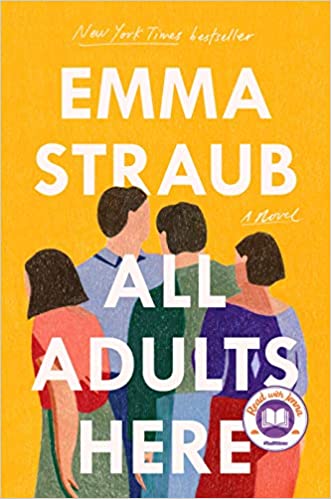 ALL ADULTS HERE by Emma Straub

Some authors seem to write the same book, over and over, while others are barely recognizable from one book to the next. Jane Hamilton is in the latter category. I just read my fourth Jane Hamilton novel, When Madeline Was Young, and it is totally unlike the other three I have read (The Book of Ruth, A Map of the World, and Disobedience). It’s a strange book, in some ways, but I really enjoyed it.

When Madeline Was Young is narrated by Tim “Mac” Maciver, who grew up in the 50s in Chicago. The woman in the title, Madeline, was Mac’s father’s first wife. Soon after her marriage to Mac’s father, Madeline had a bicycle accident and sustained a head injury that left her with the mental faculties of a six-year old. A few years later, Mac’s father (who had divorced Madeline) married Julia, Mac’s mother, but still took responsibility for Madeline, who lived in the household as a dependent of Mac’s parents.

This book has gotten mixed reviews on Amazon. Perhaps readers were put off by its meandering style, the circuitous way in which Hamilton teases out Mac’s history. But I really liked it, probably because I found Mac to be a thoroughly endearing narrator. He’s a man who loves and appreciates women, and is eternally curious about what motivates them. He is kind and inquisitive and imperfect. I have great respect for Hamilton for getting so deeply inside the head of this man that it was easy to forget that she is a woman. And I respect her for creating a book that is so unlike her other novels.

If you like books about complex family relationships, where resolution and answers may be elusive, then you might enjoy this book.

I also highly recommend the audiobook. The narrator was wonderful, and seemed to be a perfect choice for Mac. (My only complaint was that he took unnecessarily long pauses between sentences, which prolonged the audiobook and made me restless.) Sometimes when male narrators do female voices, they just sound silly, but this narrator did a great job.

There’s enough going for When Madeline Was Young that I recommend it wholeheartedly. Would love to hear from others who have read it – did you enjoy it?