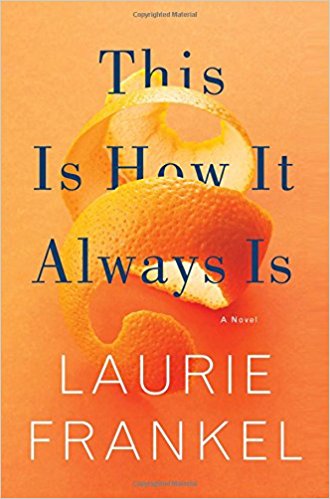 THIS IS HOW IT ALWAYS IS by Laurie Frankel

If you like books about WASPs misbehaving, then I have a summer read for you. Take a second house in New England, a blue blood wedding, a bunch of Harvard finals clubs alums, and an exploding dead whale, and mix it all with a generous splash of gin and tonic, and you have Seating Arrangements by Maggie Shipstead.

Seating Arrangements is about the Van Meter family: Winn, wife Biddie, and daughters Daphne and Livia. (The names alone!) Daphne, who is seven months pregnant, is marrying Greyson Duff, the most eligible of the four sons of Dickie and Maude Duff, on the island where her parents have a home. Other than the matter of the pregnancy, it is the perfect WASP wedding of two unobjectionable and attractive, if dull, twentysomethings. Yet going in to the wedding weekend, all is not right. Winn is obsessed with the golf club on the island that refuses to admit him despite his Harvard pedigree. His daughter Livia, who recently terminated an unplanned pregnancy and was broken up with by her college boyfriend, is resentful and unhappy due to her recent traumas. And the flirtations of one of Daphne’s bridesmaids’ with the father of the bride are becoming more and more brazen.

Oh, the drama. Over the course of the weekend, many sins are committed: infidelity, breaking and entering, assault and battery, as well as inappropriate hookups and shockingly bad wedding toasts and lots and lots of drinking. Yes, it’s all in good fun, but ultimately, I read Seating Arrangements as a rather sharp satire of the lives of this demographic. None of the characters in this book is particularly likeable. The least offensive is bridesmaid Dominique, the most level-headed of the bunch and the only one who seems to think about anyone other than him or herself. From her on comes a parade of self-absorption, selfishness, lack of empathy, and pretentiousness, the worst of all being Winn, who may be one of the more unlikeable characters I have come across in recent memory.

But Seating Arrangements is funny and well-written. Although the story drags at times, I liked the minutiae of detail around the wedding itself and the rituals and complications that always surround them. I listened to Seating Arrangements on audio, and the narration by Arthur Morey was a great match – patrician, precise, exasperated, and, well, WASPy-sounding. Morey made a perfect Winn – I worry I might have actually liked him more as a character with a different narrator.

Seating Arrangements isn’t for everyone. I suspect that if you’ve made it this far in this review, you will be able to predict with some certainty whether you’ll like this book. I did, and am glad I read it.