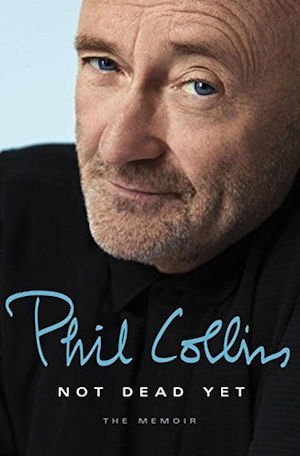 NOT DEAD YET by Phil Collins

The Expatriates by Janice Y. K. Lee is about the intersection of three women’s lives in Hong Kong. All three are American expats who have found themselves in Hong Kong, and each is deeply unhappy. Margaret is married to a successful businessman, but has suffered a terrible loss: the disappearance of her youngest child during a family vacation to Korea. Hilary is a friend of Margaret’s, and lives in Hong Kong because of her husband’s job at a law firm. She is dealing with infertility and a shaky, distant marriage. Finally, Mercy is a young Ivy League graduate who is adrift in Hong Kong with no job or much of a social life. She played a role in the disappearance of Margaret’s son and has not recovered.

The Expatriates revolves around the theme of motherhood: motherhood desired, motherhood lost, motherhood tested. Men are bit players here (and mostly interchangeable); it’s the women who Lee explores and analyzes. They are each flawed but doing their best under challenging circumstances. The plot of The Expatriates verges on soap opera melodrama and coincidence, with these three women crossing paths in very convenient ways and an ending that wraps things up on an implausibly positive note. Lee is a good writer, and I found The Expatriates to be an enjoyable read, but it’s not terribly deep.

I did enjoy the aspects of the book that focused on life as an expat in Hong Kong. That was much more interesting to me than the drama of the women’s lives. I liked hearing about the circumstances that bring people to Hong Kong, the different types of lives they lead there, and the interactions between expats and native residents. Lee is a great social observer and there is a lot of see there.

I listened to The Expatriates on audio. The narrator, Ann Marie Lee, was too breathy and dramatic for me, and she read slowly, which made Lee’s occasionally repetitive writing more pronounced and a bit annoying. But overall it was a satisfying read and listen.