Ann Patchett’s new novel Commonwealth (out 9/13) is smaller and quieter than some of her previous powerhouse novels, like Bel Canto and State of Wonder. It isn’t as meticulously researched or detailed as those other works, and it covers less ground. But it packs an emotional punch nonetheless. 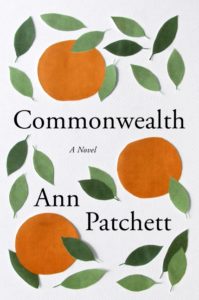 Commonwealth is about the dissolution of two marriages – Fix and Beverly’s (2 kids) and Teresa and Bert’s (4 kids) – after Beverly and Bert meet by chance at Fix and Beverly’s youngest daughter’s christening party in Los Angeles. Bert falls instantly for Beverly, and though it doesn’t happen overnight, she eventually leaves Fix and moves with Bert and her two daughters to Virginia.

This move has deep repercussions for everyone involved, of course: Bert and Beverly, their exes, and their six children, who spend summers together in Virginia when Teresa’s kids go to visit Bert. Despite their anger at their parents, the six children coalesce into a loose band – kind of like camp bunkmates – conspiring and plotting to get what they want. Commonwealth follows the group of siblings/stepsiblings over half a century, checking in with different ones over the years and jumping back and forth between past and present to tease out their relationships with each other and with all four parents. The book is really more of a collection of detailed vignettes than a coherent, linear story. Characters get closeups for a chapter or two, and then they fade into the background of another character’s story.

There are some secrets that the six share, including the circumstances around one of their deaths (sorry, a little spoiler there!). And when these secrets eventually come out, they are forced to reevaluate their relationships both as kids and as adults.

Patchett tells the story of Commonwealth at a bit of an emotional distance. Yet its impact is an emotional one. I grew to care about the characters, and I felt that I understood them deeply by the end. Patchett is such an efficient, effective writer that a chapter or two is enough to really convey the core of the characters.

There was one passage I especially liked at the end of the book, where Franny (Beverly’s younger daughter) thinks back over all of the events that took place to bring her and her siblings to where they were in life. Chance meetings, adolescent rebellions, freak accidents, waiting too long to see a doctor… each of these events had serious implications for many people’s lives. How would their lives have been different if these events hadn’t happened, or happened in a different way? Would they have wanted things to be different?

Bel Canto remains one of my favorite books of all time, and in some ways it’s surprising that these two books were written by the same person. Commonwealth has such a different tempo and scope. But I enjoyed Commonwealth quite a bit, and recommend it to fans of Patchett or domestic fiction. You won’t be disappointed.