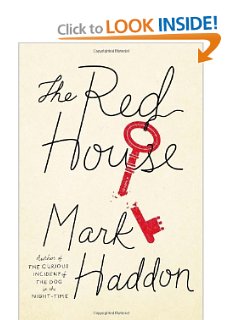 THE RED HOUSE by Mark Haddon

I don’t read a lot of non-fiction, and rarely political non-fiction, but I made an exception for Hillary Clinton’s new book, What Happened, which is her post-mortem on the 2016 election.

Full disclosure: #I’mWithHer. Have been from the beginning – even the 2008 presidential race. My husband worked for Hillary for four years at the State Department, and I’ve been lucky enough to meet her, as have my kids. So I went into What Happened already a big fan of Hillary’s. And I went into it as someone who was existentially disappointed after the 2016 election and who has been depressed and angry ever since. So that’s the prism through which I read the book.

Even though What Happened got me angry all over again, I really enjoyed it and am glad I read it. There are several sections of the book: some background on her decision to run for president in ’08 and ’16, some chapters about her personal life, a fair amount (too much?) about her policy positions, and, of course, a detailed dissection of the months leading up to Election Day 2016. There is a lot of coverage of Comey and the emails, and a very alarming chapter on Russia’s tampering in the election. But she doesn’t just blame her loss on Bernie and the emails and the Russians. Hillary takes on a lot of responsibility for the way things turned out. She knows there are a lot of people who don’t like her (as hard as that is for her), and she acknowledges missteps she made during the campaign, such as her controversial comment about coal mining. She also offers a lot of theories for why certain groups voted for Trump, why some didn’t vote at all, and how campaign tweaks might have flipped key districts that ended up sealing the deal for Trump.

It’s so clear to me that Hillary was absolutely qualified to be president and that our world would be such a different, safer and better place than it is now, had she won. What Happened confirmed all that, of course, but it also gave me a better sense of who Hillary is as a person, which I appreciated. Her humor shows through in the book, as does her intellect and her passion for public service and making the world a better place, particularly for the disenfranchised and disadvantaged.

Here are some of the criticisms and reservations I’ve heard about this book: “I can’t read it. Too soon.”; “She’s not going to talk about her role in losing the election.”; “Enough from her already.”; “It will make me too upset”. I get it; yes, she did; it’s never enough; and yes, it’s beyond upsetting. But it was oddly reassuring to hear her perspective, and to hear her say that we’ll get through this and that things will get better again. I hope she really believes that, because I am depending on that hope.

I listened to What Happened on audio. It’s narrated by Hillary, and hearing this all in her words and in her voice made for a very powerful experience. I highly recommend the audio on this one. I am not going to go into her narration – you know what Hillary sounds like. (I will confess that I sped it up a little bit because she talks pretty slowly. It’s a long book!)

My guess is you’re either going to read this book or you’re not. I can only say that if you’ve been hesitating because you’re worried you’ll be too upset, give it a try. You may be surprised by how it makes you feel.