My reading has slowed down a little bit, but I have read a few books and just haven’t had the time to review them. Here is a shorter -than-usual review to get me caught up. 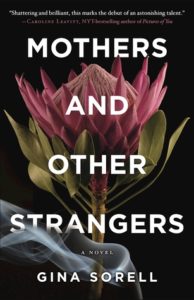 Mothers And Other Strangers by Gina Sorell is a rather dark book about Elsie, a woman in her late thirties living in LA whose mother has just died in Toronto. The two had a very difficult relationship throughout Elsie’s childhood, and Elsie had moved far away from her mother and the emotional pain she wrought in her daughter’s life. Mothers And Other Strangers is an examination of their lives together and the mysteries surrounding her mother’s death. Elsie’s attempts to understand her mother in death – which she was never able to do during her life – take her from Toronto to Paris to Capetown as she is driven to learn about why her mother acted as she did.

Mothers And Other Strangers is a novel about relationships, but it’s also a thriller, as Elsie tries to figure out why people are ransacking her mother’s apartment, and why she died destitute when she lived an indulgent, luxurious life. When she is given a box of mysterious photos and jewelry left for her at a neighbor’s apartment, safe from the ransackers, the quest to get to the bottom of her mother’s life becomes more urgent.

I liked but didn’t love Mothers And Other Strangers. I enjoyed Elsie as a narrator – her quiet, lonely life and her anger at her mother are sadly compelling – but the depiction of her high school years with her mother and the strange religious cult her mother joined left me a little cold. The big reveal at the end wasn’t all that satisfying, as it got a bit too sunny, too quickly.

I am not surprised that Mothers And Other Strangers was a debut novel. It had an interesting concept but the pacing was a little uneven and the mystery’s resolution seemed inconsistent with all that came before. If I am sounding vague, it’s because I don’t want to give too much away.

Mothers And Other Strangers is very well-reviewed on Goodreads, with many readers citing the suspenseful plot and interesting relationships. So give it a try if it sounds appealing.