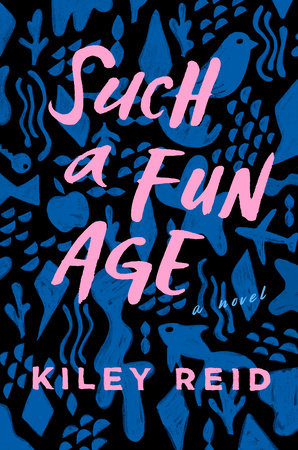 SUCH A FUN AGE by Kiley Reid

It has taken me a few days to get my thoughts together about My Dark Vanessa by Kate Elizabeth Russell. Written over the course of 20 years starting when Russell was 16, it’s the story of the sexual relationship between Vanessa and her English teacher, Mr. Strane, and the hold that relationship had on the rest of Vanessa’s life. My Dark Vanessa was written long before #MeToo, but its publication was certainly timely, as it hit the scene just as discussion around #MeToo was hitting a national fervor. But it would be wrong to dismiss My Dark Vanessa as “that #MeToo novel”. Instead, it’s a painful and painstaking story about a relationship with an inherent power imbalance and a deeply flawed man and a scarred woman. Yet there are shades of grey that even the narrator acknowledges that make the book more complicated, and therefore more problematic to characterize.

Why I picked it up: I got My Dark Vanessa as an ARC at the Buzz Books panel at Book Expo 2019, and finally was in the right mood for it.

Vanessa Wye is a scholarship student at a boarding school in Maine, where she is mostly a loner living in a single. Her English teacher, Jacob Strane, begins a flirtation with her that quickly crosses lines of propriety and turns into a physical relationship that lasts throughout Wye’s sophomore year. When the rumors about the two get too loud for the school to ignore, they are confronted about their relationship. This leads to Vanessa’s leaving the school, but the relationship persists over many, many years. My Dark Vanessa goes back and forth between 2000 (age 15) and 2017 (age 32), when Vanessa is still in touch with Strane and still deeply (and negatively) affected by him. Yet while the reader can clearly recognize Strane’s manipulation, narcissism and impropriety, Vanessa remains under his thrall, even when she herself is disgusted by him. In this way, My Dark Vanessa illustrates why relationships based on this power imbalance are so insidious.

Vanessa is easily charmed by Strane, who flatters her from the outset, singling her out and making her feel special. While she is uncomfortable at times with the direction their relationship takes, she enjoys the power she wields and his dependence on her. But it is Strane who holds the power, swearing Vanessa to secrecy and guilting her over the years into keeping her mouth shut, even as he faces accusations from other women. She becomes paralyzed in her life, abandoning her career aspirations and unable to maintain healthy relationships with other men. She vacillates between feeling disgusted by him and being dependent on him, feeling responsible for his feelings and blaming him for ruining her adolescence. She tells her therapist that she “really [needs their history] to be a love story” even when deep down, she can see him for who he is.

My Dark Vanessa is beautifully written. It’s too long and could have been pared down, but once you start reading it’s impossible to put it down. You may be disgusted by Strane and outraged by the predatory trap he set for Vanessa. But the nuance of the story elevates it beyond that one note: “It’s wrong to call me a victim and nothing more,” Vanessa says. “He was never so simple; neither was I.”