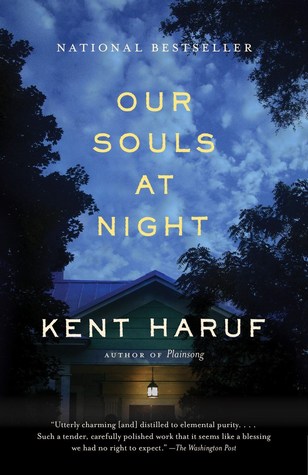 OUR SOULS AT NIGHT by Kent Haruf

Rachael Herron’s Pack Up The Moon is about parenthood, secrets and grief, and the many permutations that each can take in a lifetime.

Kate and Nolan were high school sweethearts whose rosy future abruptly ended with Nolan’s family moved away senior year. Unbeknownst to Nolan, Kate was pregnant when he moved. She never told him, and instead put her infant daughter up for adoption. The baby was adopted by a lesbian couple, who named her Pree.

Twenty two years later, Pree tracks down Kate. In the intervening years, Kate and Nolan reunited and eventually married. They had a son, Robin, who developed cancer at the age of 8. Despite intensive treatments, Robin’s cancer proved fatal, and while he was in the end stages of the disease, Nolan hastened his death by running the car in the garage while they were both in it. Nolan survived, Robin died.

When the book opens, Pree has just found Kate, and Nolan and Kate, now divorced, haven’t been in contact for years other than the occasional email sharing memories of Robin. Nolan has served time in jail for euthanizing his son. Pack Up The Moon explores Kate and Nolan’s guilt – toward each other, toward their children – as well as the secrets they kept from each other over the years, including Kate’s not telling Nolan about Pree, and Nolan remaining silent about what happened the day that Robin died. Pree, meanwhile, has secrets of her own that have propelled her to find Kate and establish a relationship with her.

Pack Up The Moon sounds like a very depressing book (surprise!), and the passages about Robin and his death are certainly very, very sad. But this wasn’t a depressing read. I liked the characters, who were quirky and different. Nolan was pretty interesting to me – a former lawyer now working on a street cleanup crew, the only job he could find after serving jail time for mercy killing his son. Pree is a video game designer and into street art stickers, a subculture that I knew nothing about. Kate was a pretty complicated character too – she seemed rather straightforward at the beginning of the book, but the end reveals many complexities and surprises within.

Some of the book felt unrealistic to me, in particular a scene at the end that took place on a boat, when Kate and Nolan have gathered to spread Robin’s ashes into the San Francisco Bay and Kate has (inexplicably) invited Pree to join. I found the passages describing the interplay between the characters the most convincing and interesting. These flawed but human characters were thrust into rather extraordinary circumstances, and I thought Herron did a good job of trying to predict how they might react. She was also generous in her depiction of the various ways we experience grief. Nolan, for example, found solace at his son’s grave (despite his role in Robin’s death), while Kate couldn’t bring herself to visit it. Kate’s grief about her mother’s death was very different from that about her son’s, while her own mother reacted in different ways to Kate’s giving away a baby at 16 and her losing a son in her 30s.

Pack Up The Moon wasn’t perfect, but it was an interesting read with some characters that have stayed with me in the days since I closed the book.

Depressing-o-Meter: 6.5 (which is surprising given the subject matter)

NAL has offered me a copy of Pack Up The Moon to give away to an EDIWTB reader. If you’d like to win a copy of the book, leave me a comment here and I will pick a winner next Wednesday, March 26. Good luck!