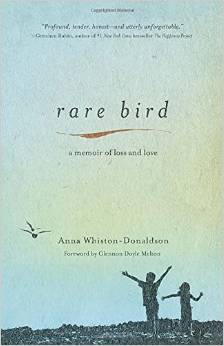 RARE BIRD: A MEMOIR OF LOVE AND LOSS by Anna Whiston-Donaldson

I have taken an unplanned blogging break this month. I was strong going into the new year, with 3 books finished in the first 10 days of January. And then… nothing. No posts and minimal reading. I blame a combination of work, snow, sick kids, ballet rehearsals and travel. But I am back, with a review. Thanks for bearing with me!

I just finished a book that I learned about in my college alumni magazine: Graduates in Wonderland by Jessica Pan and Rachel Kapelke-Dale. It is a modern day epistolary memoir consisting of email correspondence back and forth between Jess and Rachel, recent Brown graduates who are many thousands of miles apart but keeping their friendship alive and well online. Jess moves to China after graduation, somewhat impulsively, where she hangs out in the Beijing expat scene with another Brown classmate and finds work at a magazine. Rachel moves to NY, like many others from her class, and works in a gallery for a self-absorbed boss who causes her so much anxiety that she needs therapy.

Over the next few years, we follow Jess and Rachel’s professional and personal adventures. Rachel moves to Paris to pursue a master’s in film. Jess leaves a promising editing career to follow a boyfriend – again impulsively – to Australia. But the constant through all of this change is the honest, supportive relationship that Jess and Rachel maintain over email. They make reference to phone calls, but all the good stuff makes it into the emails.

There’s classic twentysomething fare here – the sense that everyone else has a life, but you don’t; the paralyzing fear of making the wrong career choice; wondering if you’ve found The One, and if you’re ready for that; and the feeling of being adrift without a geographic home base. Add in the language barriers and physical distance inherent in living abroad, and it’s easy to see why Rachel and Jess’ friendship was so important to them. They were living similar lives, only many, many time zones apart.

I enjoyed Graduates in Wonderland. There wasn’t much Brown in the book – they had already graduated, of course – but the book really brought me back to my early 20s, when I was dealing with some of the same issues. A friend of mine recently presented me with a letter (!) I had written him in 1993 when he was living abroad after graduation. It was not dissimilar to the emails in Graduates in Wonderland. I just wish I had more of those letters – email was not widespread in the early 90s!

I recommend Graduates in Wonderland to fans of epistolary memoirs and anyone who can relate to – and wants to re-experience – the uncertainty and excitement of starting out in the world.