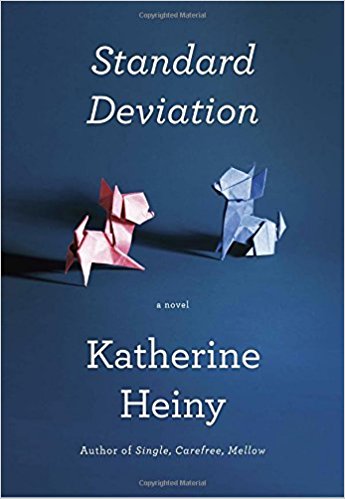 I was drawn to Aja Gabel’s novel The Ensemble because I liked the premise: four people spend decades together as members of a string quartet, bridging San Francisco and New York and back to San Francisco, spanning life events like marriages and parenthood, knowing each other more intimately than spouses thanks to the intensity caused by proximity and interdependence. And for the most part, that’s what I got from it, though it was not quite what I expected.

Why I picked it up: The Ensemble is my book club’s May pick, and it has been on my shelves for a long time! I was happy to get to it. Plus, that cover.

Brit, Jana, Henry and Daniel become an ensemble when they are young musicians starting out their careers. Jana, an intense and driven violinist, meets violist Henry in conservatory, and they eventually join forces with Brit, another violinist, and Daniel, a cellist, to form the Van Ness String Quartet. Henry is a prodigy from a wealthy family, while Brit is an orphan and Jana is estranged from her distant mother. Daniel comes from a poor family and has always struggled financially and from a lack of confidence. Brit and Daniel become romantically involved early on in the quartet’s existence, then break up abruptly, setting up an undercurrent of tension that will pervade their interactions for years to come. Daniel similarly has a persistent envy of Henry’s raw talent that will complicate their dynamic over the years as well. Gabel follows the quartet as they become more successful, checking in every few years with the individual members as well as the group dynamic as they ease into middle age.

I liked Gabel’s exploration of the role these musicians played in each other’s lives, like a family where you have to accept and depend on each other, for better or worse. The Ensemble is very introspective, with lots of interior shots of these characters’ minds. I was hoping for more about the mechanics of being in an ensemble, from performing together to rehearsals to rivalries and different playing styles. That’s all there, to some extent, but it plays a backseat to somewhat repetitive analyses of the characters’ thoughts and feelings. Lots of telling, not so much showing. I got kind of bogged down in the first two thirds, when the book felt pretty slow, though by the last third I felt more invested and became more patient with Gabel’s writing style.

So The Ensemble was a mixed bag for me. I liked the complexity of the characters and the unique nature of their relationships, but I would have been interested in more emphasis on the music and the workings of the ensemble and less on the characters’ feelings and angst. (Can I point out one line that I loved, though, about Northern California? “This was the kind of California that was so unbelievable that it was nearly unbearable, and there was nothing for Brit to do but relax into it.”)

I listened to The Ensemble on audio. It was performed by one of my favorite narrators, Rebecca Lowman, and while she did a great job with it, I don’t think The Ensemble lends itself well to audio. It’s too meandering and too introspective. I appreciated the listings of the pieces performed by the quartet at the beginning of the sections – it would have been fun to hear the pieces played as they were discussed in the book as well.