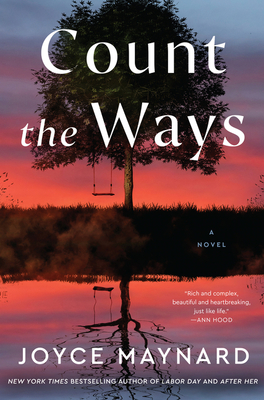 COUNT THE WAYS by Joyce Maynard

You may finish Julia May Jonas’ debut novel Vladimir and ask, “WTF did I just read?” That’s not necessarily a bad thing, but Vladimir is definitely a provocative, messy novel that takes some unexpected turns and blows up a few stereotypes. If you’re looking for a dark(ish) character-driven story about aging, romantic obsession and #metoo, then I highly recommend giving Vladimir a try.

Why I picked it up: I saw Vladimir on a number of 2022 preview lists, and when the reviews started appearing, I knew I wanted to read it. It’s also my IRL book club pick for February.

Our unnamed narrator is a fiftysomething English professor at a small liberal arts college in upstate New York. Her husband John, a professor in the same department, is on leave pending an investigation into allegations that he had consensual sexual relationships with several students a decade earlier, When the book opens, an associate professor named Vladimir has come to the university with his wife and young daughter, and the narrator takes an immediate liking to him. It’s hard to characterize how she feels about her husband: she knew about the affairs, as they had an open relationship, but she is angry about the position his dalliances have gotten them into, and she’s bored with and mostly over him, though she is occasionally reminded of why they fell in love.

As Vladimir progresses, her obsession with Vladimir grows. Her fantasy life is aglow, if only in her own mind, spawning schemes and scenarios where they might be in a position to consummate her (unrequited?) attraction. Meanwhile, she expresses insecurity about her looks, aging, her writing, her standing in the department, and even her parenting, as her grown daughter returns home in the midst of all of this to nurse a breakup. As she and John become more estranged and her focus on Vladimir grows more intense, it’s clear that she is on a collision course with a dangerous – though potentially exhilarating – entanglement of her own.

I loved Jonas’ writing – laser sharp, acerbic, observant and dead-on. I marked so many pages of this book where I felt that she just nailed it – interactions, observations, statements that felt incredibly true to life. The narrator is not necessarily a good person, but she makes sense. My major complaint lies in her relationship with John and why she has stayed with him. I wasn’t convinced enough of his charm to believe in the good moments, as I mostly found him unappealing. I did appreciate that Jonas made her aware and tolerant of his affairs, avoiding the victimization that plagues so many wives of philandering husbands in fiction.

The ending was unexpected, but I liked it.

Vladimir is definitely polarizing – that cover alone has generated a lot of discussion on Goodreads – but I am in the “liked it a lot” camp. I can’t wait for my book club to discuss it.

Vladimir was the 7th book of 2022 and satisfies the Debut Novel and Book With A Name In The Title categories of the 2022 EDIWTB Reading Challenge.