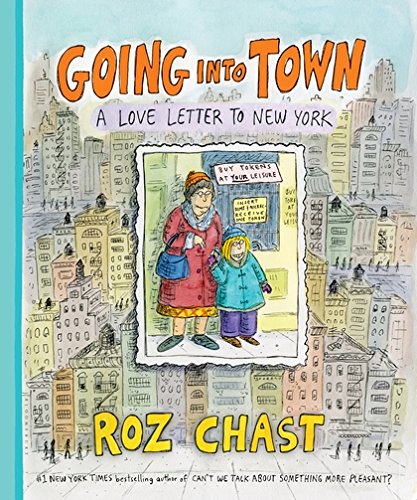 GOING INTO TOWN by Roz Chast

When Stephanie Land was in her 20s living in the Pacific Northwest, she got romantically involved with a man and ended up getting pregnant. She hadn’t planned on becoming a mother then – and was in fact planning to go to college in Montana – but she decided to have the baby and try to make it work with her boyfriend. They ultimately broke up, sending Land down the path of trying to support herself and her daughter Mia as a single mother with no safety net from her family or other means of income. Maid is Land’s memoir about her years working as a housecleaner and living off of the very low wages she earned doing physically exhausting work while trying to keep a roof over Mia’s head and furthering her own education and a career as a writer.

While Maid is a very personal account of Land’s life, it is also a look at low-wage jobs in America and how poverty leads to a precarious existence that is one bad stroke of luck away from homelessness. Land writes about her hopelessness after a car accident that left her without any means to get to and from the houses she cleaned, the black mold and frigid temperatures in the studio apartment she rented (the only one she could afford), and the disdain she felt from those behind her in line at the grocery store when she used public assistance to pay for her food. The chips are stacked against single mothers, and Land’s everyday existence was a struggle, from trying to get access to the welfare money for which she qualified to finding care for Mia when she was sick and Land couldn’t miss work.

So Maid is a pretty controversial book. Some readers have very moved by it, while some found Land whiny and entitled. I fell into the first camp. Land is not perfect and sometimes made some bad decisions, but generally I found her very compelling. She clearly wanted the best for her daughter and did the best she could to provide it. She worked hard, despite hating the work itself, and always had Mia’s best interests at heart. Land was alone, without financial or emotional family support, and her existence was often a lonely one. She bore sole responsibility for Mia’s health and enrichment, except on the weekends when Mia saw her father, and she did it on a very low income. I tried to imagine myself in her position several times, and it was hard – I have family nearby and backup funds and the means to provide basic things that Land had to work so hard for.

Maid provides needed perspective and insight into an often invisible demographic. It made me think harder about the people who do the menial jobs we take for granted – cleaning and custodial work that. How many times have I passed my office’s cleaning staff on my way out the door without giving them much thought? Since reading Maid, I’ve tried to be more aware, more mindful and more appreciative of the people who do these jobs, working very hard to make ends meet and often falling short.

I listened to Maid on audio and I highly recommend it. It’s narrated by Land, and she’s a clear, precise performer. Some listeners complained that she was whiny, but I don’t agree. My only complaint is that there are a lot of unanswered questions about her own family and why they were so unhelpful to her. The sections about her family seemed most unsatisfying on audio, where her narration seemed almost too dispassionate on this topic. Overall, though, I am really glad I opted for the audio version.