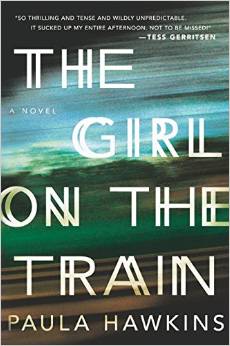 THE GIRL ON THE TRAIN by Paula Hawkins

Matthew Perry has a new memoir out, and it’s not what you’d expect. It’s not a dishy tell-all about his years on Friends, nor is it a Chandler Bing-esque, self-deprecating romp through his years of superwealth, A-list celebrity. No, Friends, Lovers, and the Big Terrible Thing is a harrowing chronicle of Perry’s addiction to alcohol and opioids and the terrible toll this disease has taken on his life. Countless spells in rehab, followed by shaky periods of sobriety and swift relapses sent Perry’s time on Friends to the backdrop of this memoir, only lending historical context (he says you can chronicle his addictions based on how heavy or thin he was on the show) and highlighting the contrast between what we all saw on TV and what was going on in real life.

Why I picked it up: I love celebrity memoirs and this one sounded particularly interesting. Plus, Friends.

Perry traces many of his troubles back to his childhood. His parents divorced when he was a baby, which ultimately led to an unstable childhood and a lack of confidence in his parents’ love and attention. His father moved to LA and his mother took on high-profile jobs in Canada, leaving Perry on his own a lot. He felt he had to be the funny guy, earning his mom’s attention and masking his inward pain. This propelled him into acting and ultimately sent him to LA. He also developed a drinking problem, which was exacerbated by the rollercoaster of life as a struggling actor. By the time he landed Friends, he was highly dependent on alcohol. Even though he ultimately got sober, Perry substituted pills for drinks, developing a growing addiction to opioids that threatened his life and killed his relationships.

You may have read the excerpts from Friends, Lovers and the Big Terrible Thing, such as Perry waking from a coma to learn that his colon had exploded, or that his habit once reached 55 (!) oxycontin tablets a day. This is a difficult downer of a book, with the periods of addiction and episodes of relapse eventually blurring into each other. It’s hard to keep track of when things happened, and in what order, but in the end, it doesn’t really matter. My takeaway from this memoir is that unless you’re also afflicted with the disease of addiction, it’s really hard to understand what it’s like and how powerless addicts actually are. I came away with a lot of empathy for Perry, who said on many occasions that he’d give it all up – the fame, the money – to not have the Big, Terrible Thing. What a hard road he has walked. It’s tempting to say “well, you brought this on yourself, and you could have stopped it”, but when you read about how hard he tried, you realize that it’s just not that simple or easy.

Perry is a good writer (and a good narrator), and the book is easy to read. The chronology can get fuzzy, and Perry repeats himself a lot, which gets a bit tireseome at times. But I forgive the disorganization. Friends, Lovers, and the Big Terrible Thing is the work of a man desperate to tell his story, both to help others on the same path and also to hold himself accountable to his fans, to his readers, to help ensure he doesn’t go down it again. It’s not a perfect book – and he’s far from a perfect guy – but it was a worthwhile, interesting and thought-provoking read.

Friends, Lovers and the Big Terrible Thing was the 54th book of 2022 and satisfies the memoir category of the 2022 EDIWTB Reading Challenge.